From EcoliWiki
Jump to: navigation, search

E. coli is a member of the:

E. coli strains fall into five major taxonomic lineages (A, B1, B2, D, and E; ) [3]. In addition, species in the genus Shigella group within the E. coli groupings and different Shigella species have different E. coli groups as their closest relatives. E. coli K-12 strains are in subgroup A. Different methods for producing phylogenies provide different insights into the evolution of E. coli as a group[4][5].

As of January 2010, the groupings in the NCBI taxonomy do not reflect the major groupings of E. coli and Shigella strains.

For more on why we study nonpathogenic laboratory E. coli, see E. coli as a model organism

Note that correct usage is K-12, not K12. E. coli K-12 is not serotype K. Escherichia coli K-12 was isolated in the fall of 1922 from the stool sample of a diptheria patient in Palo Atlo, California. The use of E. coli K-12 as a model organism for research was by sheer luck as E.L. Tatum received a culture of K-12 along with other species of bacteria for his biochemical genetic research. E. coli K-12 is prototrophic, easy to cultivate and its short generation time makes it easy to study in large populations.

E.coli B is the clonal descendant of a Bacillus coli strain from the Istitut Pasteur in Paris used by d'Herelle in his early studies of bacteriophages .Daegelen [6] examined the literature to derive what is known about the geneology of E. coli B strains. Current E. coli B strains are derived from the E. coli used in the phage studies of the Luria, Delbruck, and Hershey groups associated with the Cold Spring Harbor Phage community. Strain E.coli B is the common host for phages T1-T7 which led to the widspread use of B along with E. coli K-12.

Lieb et al. [7] describe differences between E. coli C, B, and K-12 in their study of hybrids between different E. coli strains. 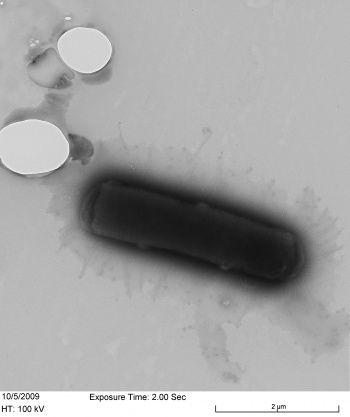 E. coli types are based on major surface antigens[8]

The pangenome is the nonredundant set of all genes found in all strains of a bacterial species. Based on analysis of 61 E. coli genomes, Lukjancenko et al.[13] identified 15,741 gene families in the E. coli pangenome.

There are roughly 200 completed or ongoing sequencing projects for strains of E. coli. While this list continues to grow, some are listed here on EcoliWiki and NCBI has a complete list.